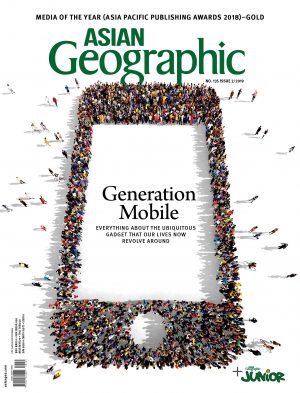 Asian Geographic Single Issues, Magazines
Asian Geographic Issue 02/2019 No. 135
$10.00 SGD
This issue compares the mobile phone scene in Asia and the West and delves into everything related to the gadget that has become very much a part of our everyday lives. We zoom in on apps, wireless networks, mobile service providers and phone manufacturers – the people and technologies that fuel the burgeoning global mobile phone market. We illustrate the evolution of the mobile phone and what actually goes into its production with informative timelines and carefully crafted infographics. In addition, we explore the problems and possibilities that come with the ever-evolving mobile phone scene. Be inspired by winning photographs from international mobile photography competitions in the mobile photography special and reminisce about pagers, phonebooks and other essentials that kept people connected in the past.
Add to cart 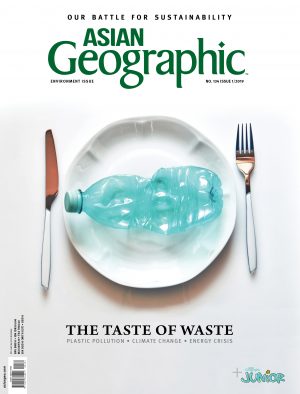 Asian Geographic Single Issues, Magazines
Asian Geographic Issue 01/2019 No. 134
$10.00 SGD
This issue’s theme coincides with ADEX 2019’s ‘a plastic-free future and is designated official magazine of Ocean Partnership Summit 2019. It is also the first issue that incorporates eight pages of our distinctive junior section, so that your young ones can enjoy articles on the same theme in the same magazine.
Add to cart
Out
of stock 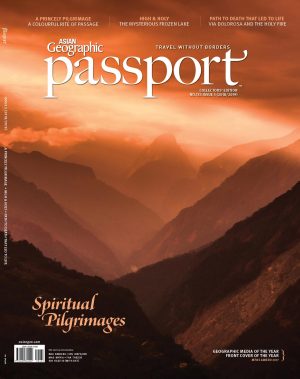 Asian Geographic Single Issues, Magazines
Asian Geographic Issue 05/2018 No. 133
$10.00 SGD
Themed spiritual pilgrimages, this issue of Passport takes you on various journeys that are at the heart of different faiths held by people around Asia. With stories that uncover spiritual practices and places across the continent and a six-page 2019 festival calendar to inspire your travels next year, this is an issue not to be missed!
Read more
Out
of stock 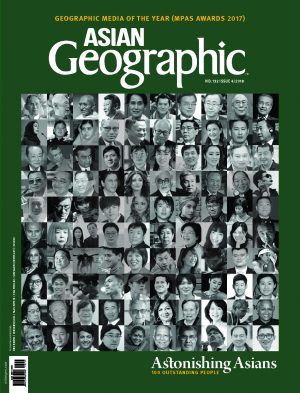 Asian Geographic Single Issues, Magazines
Asian Geographic Issue 04/2018 No. 132
$10.00 SGD
Draw inspiration from influential leadership icons, philanthropic champions, business magnates, science icons, cultural figures and sports heroes in our list of 100 astonishing Asians. Read about how plein-air drawing is gaining a strong following in urban societies worldwide in an age when instant photo feeds prevail. In 'Microscopic Plastic Litter and Rivers of Filth', we spotlight the issue of plastic pollution and how this environmental nemesis can find its way to your dinner. Find out how a Dutch man had a hand in writing history when he copied the Portugese’s closely-guarded sailing routes to the East Indies in 'The Map That Opened Up Southeast Asia'. What's your impression of Kama Sutra? Find out how it compares to the true identity of what could be the most celebrated yet misunderstood treatise on sex. See Singapore from new perspectives in Sony ambassador Michael Yamashita’s shots of the garden city, and view a snapshot of the highest and longest natural and man-made structures in the East and West.
Read more
Out
of stock 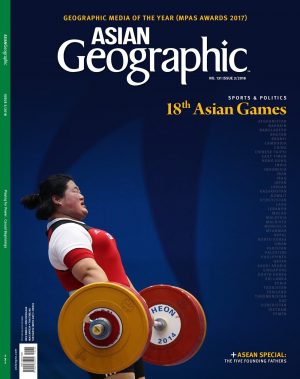 Asian Geographic Single Issues, Magazines
Asian Geographic Issue 03/2018 No. 131
$10.00 SGD
This year, the quadrennial Asian Games – a massive sports event that often gets mixed up with some of its regional variants – will be hosted here in Southeast Asia. We appraise several local sports that set the Asiad’s lineup apart from its Olympic counterpart, and drop in on three unique sportspeople gearing up for August. But the 18th Games’ most interesting aspect could just be its return to Indonesia, a place where, over a half-century ago, Jakarta’s controversial hosting decisions shocked the 1960s’ worlds of sports and politics. Indonesian politics also kicks off another fascinating tale: how five Southeast Asian men managed to create the first Asian miracle of the 20th century: the Association of Southeast Asian Nations. Helped by a few rounds of golf and drinks, these powerful diplomats succeeded in getting their respective countries – many with histories of bitter grudges and border invasions – to team up into a bloc that today still merits international admiration. Their surviving family and friends share memories of these master negotiators.
Read more
Out
of stock 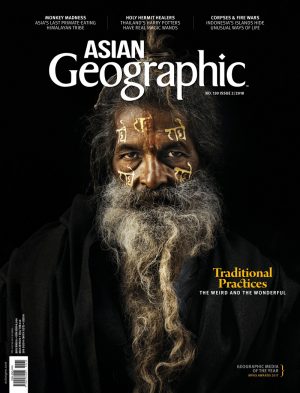 Asian Geographic Single Issues, Magazines
Asian Geographic Issue 02/2018 No. 130
$10.00 SGD
What is tradition? In this issue, we look at how a people’s loving protection and willing maintenance of ancient observances allow rituals like fire wars to survive the generations, and revive fading subcultures – like Thailand’s forest wizards – from the brink of extinction. Yet this era’s predominant theme seems encapsulated by the underdog tribe’s failure to resist bartering unique customs for a share in progress, meaning unusual ways of life, like monkey hunting and corpse care, may soon be permanently forfeited to history. Dive into the weird and wonderful parts of Asia’s heritage as we uncover the diverse ways that her people make meaning of milestones and seasons, and live unique lives across remote islands, quiet villages and high mountains.
Read more
Out
of stock 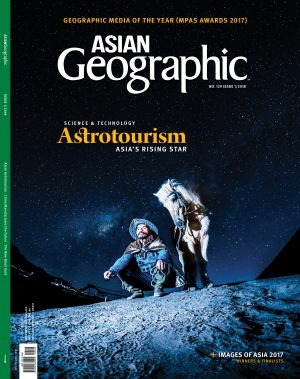 Asian Geographic Single Issues, Magazines
Asian Geographic Issue 01/2018 No. 129
$10.00 SGD
With the modern world developing at the dizzying pace it is, do you know what’s going on around you and how it all works? In this issue, we look at the latest in science and technology across the region, from the obvious – China’s transformation from IT copycat to technology leader – to the unexpected, like why Cambodia’s farmers are now selling bat faeces instead of rice. Go on a sparkling journey across the night sky in our exclusive story on astrotourism, an upcoming trend that’s winning the hearts of Asians young and old across the region. Read about a mysterious bridge between India and Sri Lanka that has geologists befuddled, and a hyper fast underwater levitating train – straight out of a sci-fi movie ­– that you might soon be able to buy tickets for. Are you ready to get up to speed?
Read more
Out
of stock 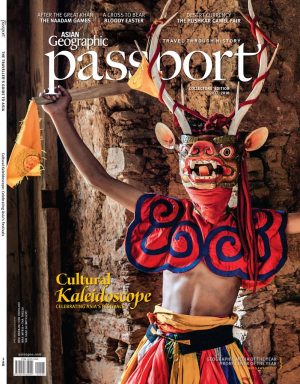 Asian Geographic Single Issues, Magazines
Asian Geographic Passport Collectors’ Edition 2017/2018 No. 128
$7.50 SGD
Asia’s festivals can really be summed up in one word: diverse. From east to west, the region boasts a smorgasbord of the weird, the wonderful, and the downright bizarre. But whatever their flavour, festivals offer a fantastic means of immersing oneself in a foreign community’s culture. In keeping with Passport’s mission to equip the modern traveller with a comprehensive guide to Asia, we’ve covered as many bases as possible, with a calendar and listings of some of the festival highlights in the region – and you’re invited. Journey to Mongolia for the riotous Naadam festival, which gives the Olympics a run for its money in terms of its fierce competitive edge, with three Genghis Khan-approved traditional sports. Visit the Surin Elephant Roundup, which has its origins in Thailand’s royal hunts in the Ayutthaya period. In the Philippines, Easter takes a turn for the queasy as Catholic devotees re-enact the crucifixion in all its gory glory. Take a turn to India for the Pushkar Camel Fair, the largest of its kind in the world, and in Central Asia, get into the spirit of the widespread Nowruz celebrations.
Read more
Out
of stock 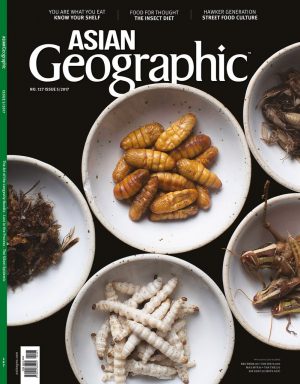 Asian Geographic Single Issues, Magazines
Asian Geographic Issue 05/2017 No. 127
$7.50 SGD
In this issue, we unpack several health controversies and crises, from MSG to processed foods to the insect food revolution and diabetes. But it’s not all doom and gloom: The region’s varied cuisine is an intangible part of its heritage. We pay homage to the enduring art of the longevity noodle – handmade and visually evocative. Asia’s food culture is perhaps best summed up through the humble hawker, peddling the sheer diversity of this region’s culinary innovation through their roadside food carts. But even the ubiquitous street food vendor faces an uncertain future, as regulators of hygiene standards and urban planning brandish eviction – or “relocation” – notices. It’s time to eat smarter: to be more conscious of what we buy, how we waste, and what we ignore on that little label on the side of a can. Perhaps never before has this phrase been more weighty: "You are what you eat". Bon appétit!
Read more
Out
of stock 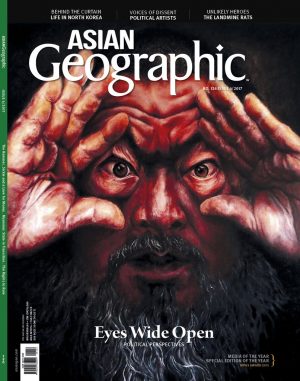 Asian Geographic Single Issues, Magazines
Asian Geographic Issue 04/2017 No. 126
$7.50 SGD
In this issue of ASIAN Geographic, we look at the politics of Asia – the controversies, the complex histories, and the ideologies of countries, past and present. Politically, contemporary Asia is something of a crucible. We have mapped out the political systems of Asian countries, examining the political balance of countries in a series of infographics. We look at the destabilisation of the current unilateral world order, particularly with the rise of China, as well as the troubled transition to democracy in Myanmar. We also visit Cambodia, where a special task force of rats is sniffing out landmines. Our cover story features a series of interviews with dissenting artists who are challenging the political status quo, fuelling intellectual debate in political cultures that look to subdue them – often at great personal cost.
Read more
Out
of stock 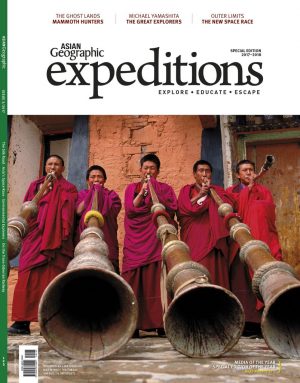 Asian Geographic Single Issues, Magazines
Asian Geographic Issue 03/2017 No. 125
$7.50 SGD
In this special Expeditions issue of Asian Geographic, we take a look at some of the most awe-inspiring expeditions and exploration missions across the continent. Journey to a remote part of northern Siberia, where the greatest concentration of mammoth tusks is concentrated. In this tough, icy terrain, palaeontologists and ivory hunters are vying for these valuable remains. Explore the past 101 years of the Trans-Siberian Railway, which covers vast swaths of terrain across the continent. In connection with Asian Geographic's forthcoming expeditions in 2017, discover the history of the Silk Road, and the routes of the earliest explorers. Find out more about the Asian space race, and technological advances to harness resources outside our atmosphere. We also profile several activists who are using their respective expeditions to improve public environmental awareness. We feature the stunning work of Michael Yamashita, who has documented the legacies of explorers such as Marco Polo and Zheng He.
Read more
Out
of stock 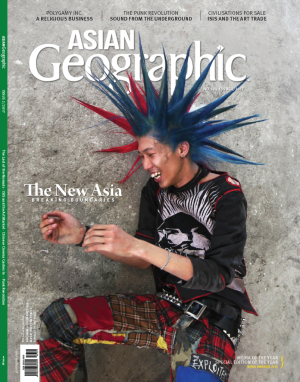 Asian Geographic Single Issues, Magazines
Asian Geographic Issue 02/2017 No. 124
$7.50 SGD
In this issue, Asian Geographic considers the concept of "culture" and its multiple manifestations, adaptations and interpretations. From the expansion of the Chinese film empire, to the burgeoning art black market in the wake of ISIS, the rise of the punk scene in Asia, and the practice of polygamy in Malaysia, merging business and religion, we examine the belief systems and cultural practices that are shaping the continent today.
Read more

Use this form to find things you need on this site